The Witness – Canopy of stars

Experience one of South Africa’s fastest growing eco-adventures with thousands of satisfied thrill-seekers having already caught the bug. A Canopy Tour® takes you on an unforgettable adventure as you slide from one platform to the next along a series of steel cables set amongst magnificent natural surroundings.

ON the longest night of this year, 10 of us stood together on a small, open platform, like mariners in a crow’s nest. Nothing stood between us and almost 50 storeys of darkness but the tethers securing us to the platform’s mast. Below us, a sea of treetops rippled in the moonlight.

The indigenous forest in Karkloof is the second largest in South Africa: only Knysna is bigger. And we were about to tour it by zip line – in the dark. 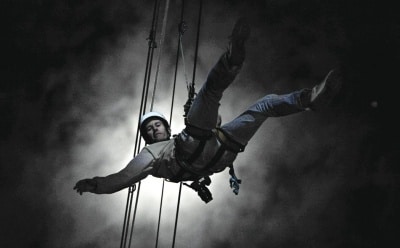 The Karkloof Canopy Tour is a thrilling way to see this still-wild place, an ancient indigenous forest containing trees that sprouted on the kloof’s steep, south-east-facing slopes at around the same time that Christopher Columbus was sailing to the New World. The idea of seeing a forest canopy by zip line first began with scientists studying the forests of Costa Rica, and the commercial aspects for tourism were soon realised.
Mark Brown, an engineer, and the franchiser of seven canopy tours in South Africa, built one of the world’s first commercial canopy tours in Costa Rica, before coming to South Africa to emulate it in the Tsitsikamma indigenous rainforest in 2001. He built another five over the following nine years, at Karkloof, Magaliesberg, Magoebaskloof, the Drakensberg and in Swaziland, and is now busy building one in the Cape.
Tonight, we’re fortunate to have him with us on the tour. He explains how he built the zip-line system at Karkloof himself in 2003, carrying in materials by hand and abseiling down cliffs to laboriously install the triple-redundancy safety features that make this an exciting but safe experience. The Karkloof zip-line canopy tour is the longest in Africa, he says, and it took him eight months to construct.
“Of all the canopy tours in the franchise, Karkloof is the most adventurous,” smiles Brown.

Nice to know when you’re about to launch yourself into the dark on the first night-time version of this thrill ride.

The idea to give visitors the experience during the full moon each month is the latest offering at Kar­kloof Canopy Tours, and they’re hoping that it will catch on with people who want more of an edge to the “soft” adventure experience of zip- lining. Because if seeing a forest canopy while suspended on a zip-line is exciting, not seeing a forest canopy while careening through it on a steel cable at night takes the experience to another level. There’s something about not knowing what awaits you at the other end, about not being able to see your destination, that heightens the senses. The pulleys running over the cable screech like an air-raid siren. Every vibration from the cable runs through your body. The full moon is brighter than a street lamp. The smell of leaf litter from the forest floor far below fills your nostrils. Every rustle in the bush around you demands your attention and you have a sense that the forest is watching you. And if you thought that darkness might help to dull your sense of vertigo, in this case it’s only in exchange for the kind of trepidation that you would feel when diving into a dark pool. What awaits?

But now it’s time to take that leap of faith. “Let us step into the night,” as J.K. Rowling wrote in Harry Potter and the Half-blood Prince, “and pursue that flighty temptress, adventure.”
We’re at the delightfully named Last Chance platform. The short zip-line ride to here was like wading into the shallows: nothing too demanding, a small taste of what’s to come. From here out though, there’s no turning back. Commit or capitulate are our choices.

One by one, we let go. Sparks fly from the steel line as we each vanish into the dark. Some scream, others are deathly silent, just the diminishing wail of pulleys over steel wires marking their descent. We wait for the far-off call from the guides to assure us that all is well and that it’s now our turn. For the next two hours, we wind our way through a kilometre of tangled timber giants. The distance is broken into sections. Some are fast, others more technical, requiring you to work your way around tree trunks or over huge rocky outcrops before letting go again and sliding into the dark. We pause on a cliff face to contemplate the almost perigee full moon as it hangs over the Karkloof valley, then at a waterfall for a cold drink. Then we plunge back under the roof of the forest, through leaves and branches and the smell of damp undergrowth, to burst back out into the open over a deep gorge. There’s time to breath deeply and quickly take in the silver-lit landscape as we fly though the air, and then we must pull down hard on the cable to brake as the next platform looms into view.

It’s getting colder as we sink towards the valley floor. Some of us start to shiver as adrenalin and the chilled night air make themselves felt. A last ride to the final platform and a short hike through trees, over boulders and across a stream, are all that separate us from a hot dinner back at base. And then we’re there. We exit from the forest by a lantern-lined pathway that leads us to two roaring fires and a chance to warm ourselves while we relive our adventure. Some are relieved it’s over, others want to do it again. All of us feel that little bit more alive because, as John Shedd wrote in Salt from My Attic: “A ship in harbour is safe, but that is not what ships are built for”. We all need a little adventure in our lives.

Buy One Get One FREE! GO GREEN with us over the Black Friday weekend

Stuff wears out: experiences last forever! Instead of more ‘things’, wouldn’t you prefer a once-in-a-lifetime-adventure where you can create amazing memories with the special people in your life?   Take an eco-friendly stance against consumerism! Physical presents give limited joy and their novelty fades quickly, while the gift of spending time with friends and loved…

Earlier this year, an exciting new record was set at our Karkloof Canopy Tour branch when the intrepid Joyce Evans, broke her own record as the oldest guest to #flyAirNature at 94 years old, taking the bar up two notches to reset the record at 96! She was part of a group of 21 seniors…

We need YOUR help finding our new hashtag!

It’s time to replace #unzipAdventure with something new and exciting: we really like Cape Canopy Tour’s #flyAirNature but before we make a decision, we’d like to hear from you.   If YOUR hashtag is chosen, WIN tickets for you AND a friend to zipline at one of our seven branches across Southern Africa 🏆 Visit…