Experience one of South Africa’s fastest growing eco-adventures with thousands of satisfied thrill-seekers having already caught the bug. A Canopy Tour® takes you on an unforgettable adventure as you slide from one platform to the next along a series of steel cables set amongst magnificent natural surroundings.

This lavish celebration was attended by the operators of all six Canopy Tours locations in the country – Karkloof, Magaliesberg, Magoebaskloof, Drakensberg, Malolotja and Tsitsikamma- as well as members of teh media, SANParks and toursim organisation representatives, and individuals who hav ebeen involved with this remarkable operation since the first treetop tour in Africa in October 2001. 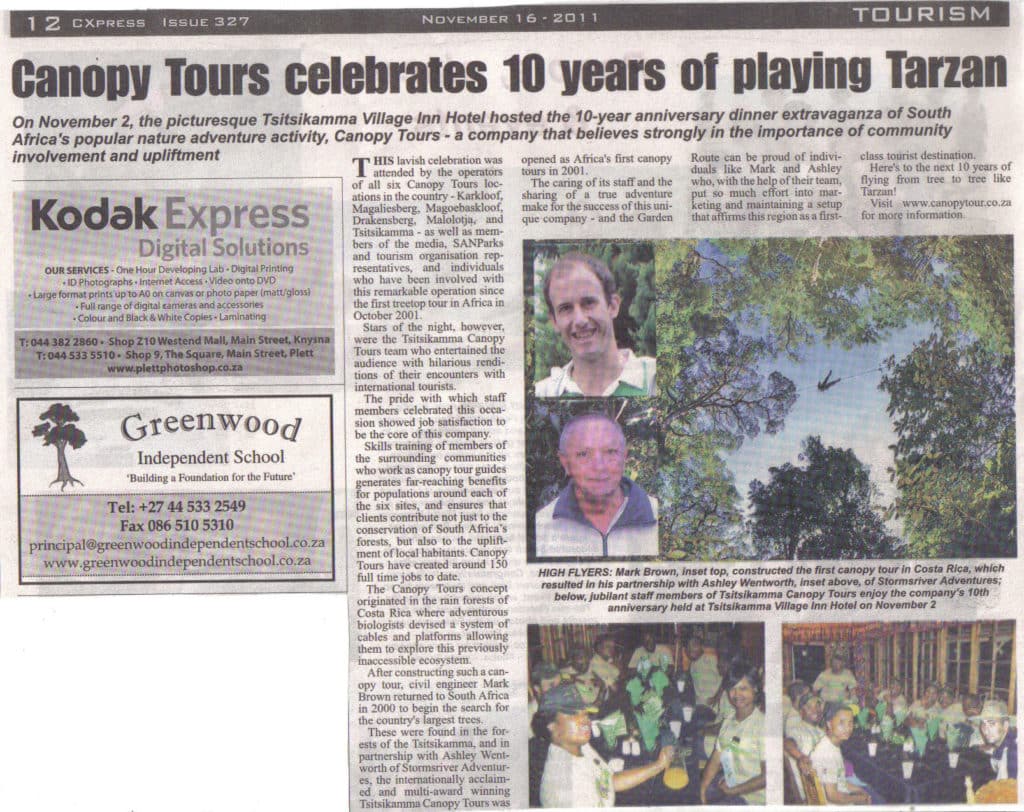 Buy One Get One FREE! GO GREEN with us over the Black Friday weekend

Stuff wears out: experiences last forever! Instead of more ‘things’, wouldn’t you prefer a once-in-a-lifetime-adventure where you can create amazing memories with the special people in your life?   Take an eco-friendly stance against consumerism! Physical presents give limited joy and their novelty fades quickly, while the gift of spending time with friends and loved…

Earlier this year, an exciting new record was set at our Karkloof Canopy Tour branch when the intrepid Joyce Evans, broke her own record as the oldest guest to #flyAirNature at 94 years old, taking the bar up two notches to reset the record at 96! She was part of a group of 21 seniors…

We need YOUR help finding our new hashtag!

It’s time to replace #unzipAdventure with something new and exciting: we really like Cape Canopy Tour’s #flyAirNature but before we make a decision, we’d like to hear from you.   If YOUR hashtag is chosen, WIN tickets for you AND a friend to zipline at one of our seven branches across Southern Africa 🏆 Visit…